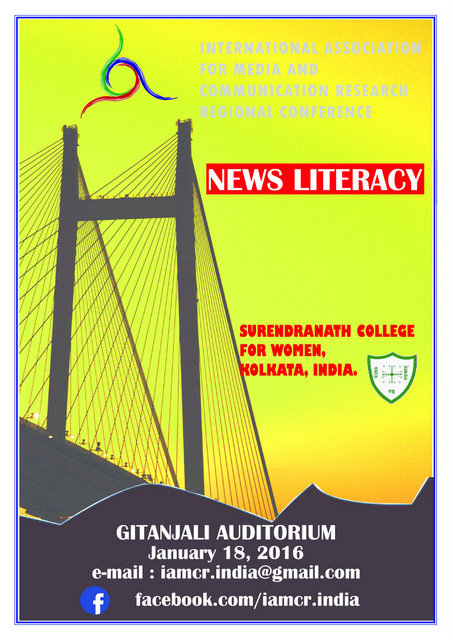 Read a report of this event

The Department of Journalism and Mass Communication, Surendranath College for Women, Kolkata, India will host an IAMCR regional conference on January 18, 2016. The International Conference on News Literacy will feature both invited and competitive sessions. Topics for discussion at the conference may include:

Overview of the Theme:

The colossal amount of information available to citizens has grown exponentially in recent years with the development of faster and more accessible avenues of information and communication technology.

The growth of citizen journalists, bloggers, aggregators and commentators has led to researchers recognizing them as the ‘Fifth Estate’. As a result, the role of traditional media as the primary purveyors of information has been challenged, with more and more information available on the social media, almost instantly. Traditional media in different parts of the world have responded by resorting to more opinion based and explanatory journalism.

This has also led to blurring of lines between traditional journalism and propaganda, entertainment, promotion and raw information. The result is that the citizens often take decisions based on unreliable and unverified information, and worse.

The onus of verification of information is now more on consumers than information providers. Hence it becomes essential for citizens to judge the accuracy of news reports and also the news sources to sift through opinionated and flawed reporting.

This calls for an increased emphasis on news literacy. Apart from advocating critical thinking skills, news literacy is indispensible for sustaining real democracy.

Critical and skeptical engagement of the consumers with news is an important element of news literacy. In the digital age, when almost everyone is a potential information source, the question of who is a journalist and who is not assumes great importance.

It is also imperative for professional journalists to reaffirm the values of truth, accuracy, public interest and social responsibility to remain relevant.